<![endif]--> Save Environment in Ship-breaking yards or Gain Profit?

Save Environment in Ship-breaking yards or Gain Profit?

The mentality of most shipowners not feeling responsible for the proper end-of-life management of their fleet needs to change, if the world is to see an end to the hazardous and environmentally unsustainable demolition of ships on beaches, the recent release of the annual report of NGO Shipbreaking Platform states. 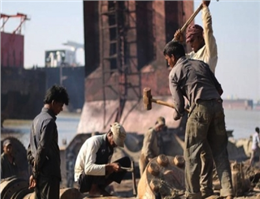 According to MANA, For many shipbreaking yards in the world, especially those in developing countries, ship demolition work continues to be a dirty and dangerous affair, prone to accidents and deaths in some cases.
The report stated that most owners “just sell old ships to cash buyers and close their ears and eyes to the consequences of this practice. What counts is profit.”
In a brief on the various shipbreaking countries, the NGO Shipbreaking Platform annual report wrote that in India’s Alang, local trade unions said at least six workers have died in accidents at shipbreaking yards in 2015, but local authorities refused to disclose the accident records.
The shipbreaking beaches of Chittagong in Bangladesh have been severely polluted and continued to be void of waste treatment and storage facilities, posing serious workplace hazards. Last year, NGO Shipbreaking Platform documented the stories of at least 16 workers who died and more than 20 who were severely injured while working in apalling conditions.
In Gadani of Pakistan, shipbreaking yards operate directly on the beach without any impermeable and drained working areas protecting the sea and sand from pollution, not to mention zero access to any kind of hazardous waste management system. The workers often have to work very long hours without extra pay or holidays, and hospitals are too far away from the breaking beaches to treat severe injuries, the report said.
The report also mentioned China and Turkey, of which both countries have adopted better practices although it believes more can be done. Chinese companies have been investing in more modern ship recycling facilities since early 2000s and the beaching method is banned. However, not all Chinese yards are fully equipped with the necessary facilities and hazardous waste handling needs to be strengthened.
In Turkey, shipbreaking companies in Aliaga intend to apply for the EU list of approved ship recycling facilities, amidst concerns over occupational health and safety amongst the shipbreaking workers.
If shipowners are really committed to not turn a blind eye to their end-of-life vessels, there are clean and safe methods of ship recycling. The most sophisticated method is to use a dry dock where a ship is recycled under similar conditions as when it was built. This method is hardly use as it is the least profitable for shipowners, the report said. Another cheaper and more widely used method, for instance in China and Europe, is pier-side demolition rather than on beaches.
“We believe that the beaching method is a dead end. Ship dismantling is an industrial activity that needs industrial methods, equipment and standards. Beach locations and intertidal zone operations cannot close all the gaps to ensure safe operations and full containment of pollutants,” she said.
“We believe that both workers and the environment all around the world have the same right to full protection – and that countries whose industries are developing such as India or Bangladesh do more harm than good to themselves by believing that they cannot operate on a more ambitious level. They can.”
0
Tags: shipbreaking NGO china
Visit Home
Send to friends
Print
Newsletter
Share this news