MEDITERRANEAN Shipping Co is once again pioneering new routes for large containerships as the even bigger vessels enter the Asia-Europe trades, with ports in Africa now feeling the impact of this cascade effect. 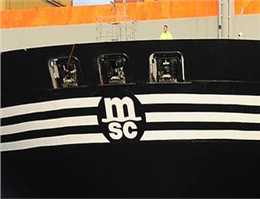 According to MANA,A few years ago, the 12,500 teu MSC Fabiola became the largest ship ever to call at a US west coast port. Now ships of that capacity are a common sight in the US, and instead the same vessel, along with the similar MSC Filippa, have just joined MSC’s Africa Express to become are the biggest vessels ever to seen in the Africa trades. They have dethroned the 11,660 MSC Francesca, according to Alphaliner in its latest weekly bulletin. The 13,000 teu MSC Beryl is expected to follow in next month.
The Aponte-led line opted for large vessels to serve West Africa when it decided in late 2014 to consolidate all its Asia-West Africa volumes at Lome, according o the analyst. So far, this is the only West African port able to handle vessels of up to 14,000 teu fully laden.
Africa Express calls at Xingang, Qingdao, Shanghai, Ningbo, Chiwan,Hong Kong, Nansha, Singapore, Port Louis, Durban, Cape Town, Lome, Durban, Colombo, Singapore, Xingang. Until now, this loop was operated using 11 ships of 8,000 teu-9,400 teu.
Weak US demand is forcing carriers to find new homes for their 13,000 teu ships, Alphaliner said.
0
Visit Home
Send to friends
Print
Newsletter
Share this news