The director of Iran Oil Terminals Company remarked: with providing the necessary infrastructures, the way has been paved for docking eight tankers for embarkation and export oil on Kharg Island Export Terminal. 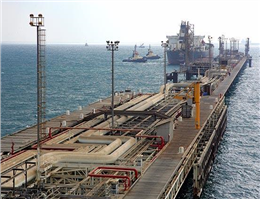 Pointing out to the simultaneous embarkation of eight tankers on Kharg Island, seyed Piroz Mousavi stated to MANA correspondent that with providing the export infrastructures of crude oil, eight tankers were docked and embarked simultaneously on Kharg Island.
Stating that experts and engineers of Oil Terminal have managed to localize special sections of Kharg Island Oil Terminal, Mousavi continued: the necessary capacities and potentials for expanding oil export in Kharg have been provided.
The director of Iran Oil Terminals asserted: the experts of Oil Department on Kharg Island make a serious contribution in construction and repairs sectors, in a way that resistance economy policies have been put into operation on Kharg Island.
In this regard, promoting efficiency in accordance with resistance economy principles has been a top priority for Iran Oil Terminals in this year, Mousavi added.
It is noteworthy that Kharg Island is located at 57 kilometers to Northwest of Bushehr Port ,which is responsible for exporting over 95%of Iran oil.
0
Visit Home
Send to friends
Print
Newsletter
Share this news