The First Mazut Oil Export Cargo Was Exported from Asaluyeh

The director of Farasakou company in Asaluyeh stated: the first export cargo of Mazut Oil with the capacity of 30.000 tons was embarked and exported from Asaluyeh. 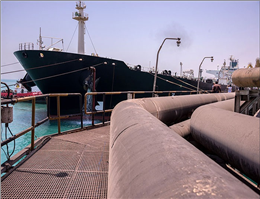 Stating that Farasakou Wharf in Asaluyeh is the largest Iranian Oil Wharf, MANA reported, Ramin Marati remarked: Farasakou company possesses two Wharf, which its Wharf No 2 with a length of 324 m and a width of 15 m had been launched last year.
Referring to the capacity of Wharf No1,he added, this Wharf with a length of 214 m and a width of 10 m is suitable for docking 30000-tons ships.
Making a reference to the embarkation of the first export cargo of Mazut Oil from Asaluyeh, Marati continued: this 30000-tons cargo is over-supplied Mazut Oil from the domestic refineries which after transferring to Asaluyeh was exported.
Pointing out to that this Wharf enjoys eight warehouses with the capacity of 350.000 barrels, Marati expressed: in the light of comprehensive development plan, a land with an area of 50 hectares will be established with the capacity of 8 million meter cubic.
In the end, The director of Farasakou company in Asaluyeh asserted: new Wharf will be added to these wharf in the upcoming week.
0
Visit Home
Send to friends
Print
Newsletter
Share this news