The unionized workers at the financially troubled South Korean shipbuilder Daewoo Shipbuilding & Marine Engineering Co. (DSME) are planning to launch a strike as the majority of the workers voted in favor of a walkout. 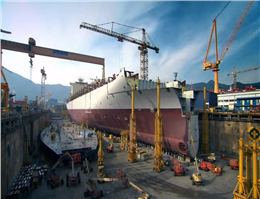 According to MANA, The Korea Herald wrote that the strike would be launched against the company’s self-rescue plan, which was reportedly cleared by the shipbuilder’s creditors just last week.
Furthermore, the unionists requested that DSME includes them in the talks on rehabilitation schemes, as the current self-rescue plan would lead to employment uncertainty and could delay a normalization of DSME’s business.
The union did not specify the date of the planned walkout.
Creditors of the shipbuilder, led by Korea Development Bank, earlier said that they would cease the financial aid if the workers launch a strike.
The USD 4.47 billion-worth self-rescue scheme would see DSME sell two of its five floating docks, as it aims to cut costs and bolster the yard’s liquidity.
DSME might have to offload some 14 subsidiaries at home and abroad by 2020 and lay off 1,200 workers in the next five years, along with a cut of up to 20 percent in wages to employees.
The company earlier revealed plans to cut its workforce by up to 10,000 by 2019.
DSME’s stringent cost-cutting measures come in light of its losses, as the ailing company reported a reduced full-year loss for 2015 worth KRW 3.31 trillion (USD 2.83 billion). The loss was substantially lower from KRW 5.13 trillion previously announced following an auditors’ review.
As part of its efforts to return to liquidity, the shipbuilder decided to sell its Seoul headquarters building for USD 152 million to Koramco REITs Management & Trust Co.
DSME is currently being investigated over allegations that it created a fund of at least KRW 10 billion through a subcontractor. The allegations are related to an order from 2007 to build a bulk carrier, which DSME forwarded to Shinan Heavy Industries (SHICO), according to Korea Times.
When the vessel was handed over, the bulker’s owner Interex Megaline paid the company KRW 170 billion for building the ship, 10 percent of which was allegedly pocketed by DSME’s former executive Nam Sang-tae.
0
Tags: Shipbuilding Strike
Visit Home
Send to friends
Print
Newsletter
Share this news