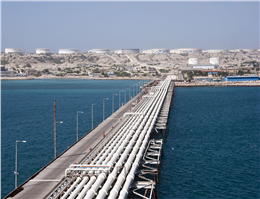 Stating that Kharg Oil Terminal is the largest Iranian Oil Export Terminal, MANA reported, Ali Shah Moradi remarked: Kharg Island has offered services to 586 vessels carrying oil since Early April 2015 to late March 2016.
Counting the optimizing of Export Wharfs as the most significant plan in this year, he added: optimizing Wharfs of Oil Export Terminals to meet the needs of tankers for embarkation and disembarkation is the most paramount future plan of operational zone of National Iranian Tanker Company (NITC) in Kharg Island.
Pointing out to the growing Iran Oil Exports and facilities of Kharg Island, The director of operational zone in Kharg Island remarked: with the execution of Joint Comprehensive Plan of Action(JCPOA)and lifting the sanctions, exports of Iran oil has risen.
Asserting that currently, vessels with the capacity of 350000 tons dock and disembark at Kharg Wharfs, Shah Moradi continued: currently, eight vessels are able to dock at Oil Embarkation Wharf simultaneously.
Regarding the emergence of Iran Tanker fleet in European markets, Shah Moradi added: to return to European markets, the necessary measures have taken into consideration ,which updating technical and security standards of fleet is of high priority.
It should not left unmentioned that Kharg Island is located at 57 kilometer to Northwest of Bushehr and is responsible for exporting over 90% of Iran oil to foreign countries.