The Kieldrecht lock at the Belgium’s Port of Antwerp has been inaugurated when H.M. King of Belgium officially opened this, now the world’s largest lock, by pressing the button to symbolically mark the inauguration. 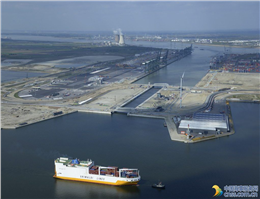 According to MANA, King Filip of Belgium was joined by MM. Ben Weyts, Flemish Minister for Transport and Mobility, Werner Hoyer, EIB President and Marc Van Peel, President of the Port of Antwerp.
The new lock is located at the end of the Deurganck dock on the left bank of the Scheldt and with a maritime connection between the Scheldt and the Waasland canal.
Via this lock, ships have access to all the other docks on the left bank and the Northern and Southern mooring docks.
The first and biggest ship to cross the lock is MS Grande Lagos, owned by the shipping company Grimaldi Lines.
“The Kieldrecht lock embodies some of the goals of a Union seeking more growth, competitiveness and jobs. As Europe is slowly stepping out of the economic crisis and so as to make sure that our single market and international trade prosper, we need a connected Union, without barriers, with efficient, viable and sustainable transport infrastructure and networks,” Werner Hoyer, President of the EIB said at the opening ceremony.
Being now the largest lock in the world, the Kieldrecht lock is 500 meters long, 68 meters wide and 17.8 meters deep. It contains 22,000 tonnes of steel, what is three times as much as the Eiffel tower.
Launched in November 2011, the construction of the Kieldrecht lock is one of the largest Flemish infrastructure projects of the past few years.
The Kieldrecht lock construction is estimated to have cost EUR 382 million (around USD 431 million).
The new lock is to provide security of operation, as each lock can act as a backup for the other, according to the Port of Antwerp.
With the Kieldrecht lock, the Port of Antwerp will be able to handle increased size of modern ships. The new lock is also aimed at providing shorter waiting times for ships, more shipping traffic and faster routes for ships and for hinterland transport.
In addition, the project fits in with the ambition of the European Union to develop a transnational, multimodal transport network by 2030.
0
Tags: Antwerp Belgium Lock
Visit Home
Send to friends
Print
Newsletter
Share this news