Neo-panamax boxship the Cosco Shipping Panama set sail from the port of Piraeus Saturday on its way to Panama for the historic first transit of the expanded Panama Canal 26 June and the inauguration of the waterway after a 14-day journey. 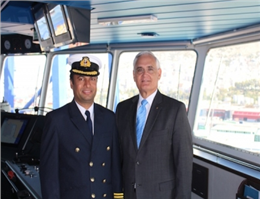 According to MANA,Panama Canal Administrator Jorge Quijano met with Cosco Shipping Panama’s Captain Jude Rodrigues and crew members prior to the ship’s departure. “I am very excited to be here today to witness the sailing of the ship from Greece, but also meet the Captain and his crew,” said Administrator Quijano. “ He [Capt Jude Rodrigues] is very thrilled to be part of this inaugural transit.”
“I have transited the Panama Canal many times before and it has been a great experience, but being the master of the first vessel to transit the expanded Canal is an experience of a century,” said Rodrigues.
Cosco Shipping Panama is a new built box ship launched on January 2016. The neo-Panamax containership is 299.98 m in length and 48.25 m in beam, and capacity of 9,472 TEUs. Originally named Andronikos, the vessel was renamed by Cosco Shipping Panama in honour of the inaugural transit.
Coincidentally, the ship was built in Hyundai Samho Heavy Industries Co, the same company that constructed the valves that control the flow of water through the new locks of the Canal.
0
Visit Home
Send to friends
Print
Newsletter
Share this news