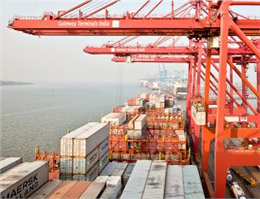 According to MANA, According to the complaint, which was submitted to the Competition Commission of India (CCI), the company reportedly forces shipping lines to use the CFSs by bundling services with some CFSs which are either operated by the group or those with which it has tie-ups.
The alleged behavior of the APM Terminals, which has a majority stake in Gateway Terminals India Pvt Ltd (GTIPL) terminal at JN Port, limits competition in the CFS market and, therefore, violates certain regulations by abusing its dominant position, according to allegations from the Indian Competition Review.
However, APM Terminals’ representative told World Maritime News that they “comply with all applicable Indian laws, rules and regulations.”
The terminal operator further said that they have not received any formal notice or communication from the Competition Commission of India and refused to “comment on rumours or unconfirmed reports.”
JN Port, which handles over 50 per cent of container traffic among major ports in India, saw a throughput of 387,335 TEUs in May, leading to 4.7 percent increase over the previous month.
0
Tags: maersk
Visit Home
Send to friends
Print
Newsletter
Share this news