THE Suez Canal Authority has announced plans to offer a significant discount on toll fees of up to 65% to traffic heading on the backhaul eastbound leg from the North American east coast to South and Southeast Asia. 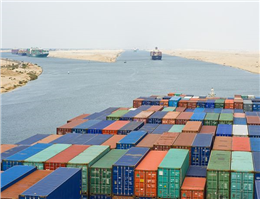 According to MANA,With immediate effect, containerships departing from Norfolk, Virginia, and North American ports further north heading to the port of Kelang in Malaysia and east Asian ports thereafter will be granted a 45% reduction on the Suez Canal’s normal tolls, according to the SCA.
Boxships heading to Kelang and ports further east from destinations south of Norfolk on the US east coast will receive a 65% discount on fees, while services originating south of Norfolk calling at the port of Colombo and eastern ports up to Kelang shall be granted a 55% reduction of the Suez Canal’s usual tolls.
The reduced fees will be introduced for a trial period of 90 days ending September 3, with the option of being renewed if the initiative proves successful.
0
Visit Home
Send to friends
Print
Newsletter
Share this news