<![endif]--> Maersk to Use Drones to Resupply its Fleet of Tankers

Maersk to Use Drones to Resupply its Fleet of Tankers

Global shipping and logistics firm Maersk is looking at ways to use drones for delivering equipment to ships and is planning to conduct a test later this year, after using the technology in January for delivering cookies to a tanker at sea, says a report in PTI. 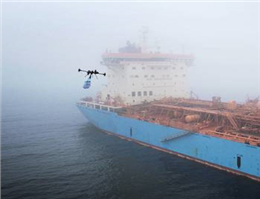 According to MANA,In January, the company made a drone fly 250 meters from one of its barges to a tanker and drop off a batch of cookies. It's now looking for a drone-making partner for a test flight that would haul a 10-kilogram package for 10 kilometers.


It would serve as a key proof of concept for getting important gear to remote ships. That 10-kg weight would cover a lot of the important equipment deliveries it makes to ships.

The benefits of using drones to resupply ships are obvious enough. If it works, Maersk will be able to save massively on the costs of sending out an entire resupply ship to carry equipment to a tanker that’s far out to sea. This happens more than one might think, because each country has its own regulations about protecting volatile cargoes.
0
Visit Home
Send to friends
Print
Newsletter
Share this news