The Guang Hua Kou, one of the world's largest heavy lift semi-submersible ships, was launched last month at Guangdong Shipyard International. At 98,000 tons, it's one of the largest vessels of its size, anywhere in the world. 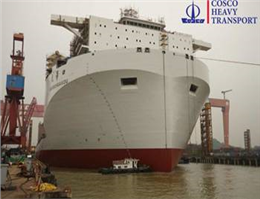 According to MANA,Though the ship is formally built for COSCO Heavy Transport, a state-owned civilian firm, it will likely be made available for the People’s Liberation Army Navy (PLAN) for peace and wartime operations, reports Popular Science.
A shipping line owned by the Chinese government, Cosco Heavy Transport specializes in handling heavy cargo. “The ‘Guang Hua Kou’ will be one of the largest vessels of its type when delivered end of this year,” explained the company, in a press release.
The Guang Hua Kou clocks at nearly 700 feet long and 225 feet wideenabling it to carry ships as big as missile destroyers.
0
Visit Home
Send to friends
Print
Newsletter
Share this news