A 766-Percent Rise in Exporting Goods from Qeshm Port

The director of Qeshm Ports and Maritime Organization stated: in the first two months of the current year, Qeshm Port witnessed the export of over 5000 tons of goods abroad, which this figure highlights a 766-percent rise. 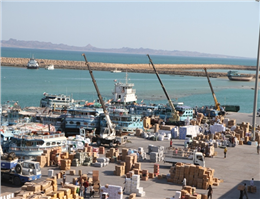 Stating the latest statistics from the performance of Qeshm Ports in transporting goods and transferring passenger sectors, Seyed Bagher Mousavi remarked: in the mentioned period,1.301,861 tons of Petroleum and Non-petroleum goods have been embarked and disembarked from Gheshm Port.
He added: the volume of over 5184 tons of goods has exported abroad, which this figure depicts a 766-percent rise in comparison with the same period in the last year.
Emphasizing the activity in the transferring passenger sector, he asserted: in the first two months of this year, approximately,4.646.747 passenger have been transferred in Qeshm Ports.
Making a reference to the growth in transporting cars through ports, this official figure remarked: in the mentioned period, the transporting 620.486 cars have been done through these ports.
0
Tags: قشم
Visit Home
Send to friends
Print
Newsletter
Share this news