<![endif]--> The capacity of Khorramshahr Port Reaches 300,000 Container in Year

The capacity of Khorramshahr Port Reaches 300,000 Container in Year

The director of Khorramshahr Ports and Maritime Organization announced that a General Auction for establishing container Terminals in Khorramshahr Port will be held in the two upcoming months. 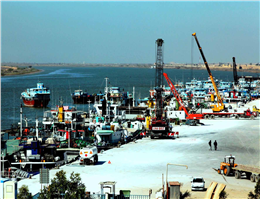 Adel Dris stated to MANA correspondent that any Dredging Operations in Arvand international waterway should be done with the cooperation of Iraqi side,so far, he added, the necessary measures have been taken by the legal Committee of Arvand in Ministry of Foreign Affairs and Joint Office for cooperation between Iran-Iraq in Khorramshahr, but Dredging Operations of Arvand waterway is not a priority for Iraq.
He emphasized: in addition to Dredging operations in Arvand international waterway, Refloating Sunk Vessels which are related to Iran-Iraq war is of great significance for us.so far, he continued:160 Sunk Vessels have been refloated from Karoon to Arvand.
Stating that 61 Sunk Vessels have still been remained in Arvand international waterway, Adris remarked: for refloating and salvaging , legal formalities have been done.
Emphasizing the significance of security for commuting ships and maritime vessels in Arvand international waterway, he proposed: Refloating Sunk Vessels which are remained from Iran-Iraq war is absolutely necessary and by observing Legal issues and regulations, Ports and Maritime Organization intends to gain required licenses for salvaging them.
Pointing out the significance of Khorramshahr Port, Dris remarked: enjoying 230 hectares area, this port is considered as the third Iranian free port in the Persian Gulf, he added, due to using the same language in Khorramshahr Port and Iraq, this port has turned into a strategic region , as well as, factors such as being located in the vicinity of Abadan refineries and Foolad Khuzestan and connection to national railway have doubled its significance .
The director of Khorramshahr Ports and Maritime Organization remarked: currently, in order to developing and promoting container capacity of Khorramshahr Port, a project worth of 400 Billion Rials is still under construction.
Referring to the development of Khorramshahr Port, Dris remarked: the process of establishing container Terminals would be put in General Auction in the two upcoming months, we aims to develop the necessary infrastructure of container Terminals in this port through the cooperation of investors from the private sector.
The director of Khorramshahr Ports and Maritime Organization asserted: currently, the capacity of embarkation and disembarkation in Khorramshahr Port is 150,000 container, with implementation of development plan of container capacity in this port, he added, it is speculated that this figure could rise to 300,00 container in the next 15 years.
0
Visit Home
Send to friends
Print
Newsletter
Share this news