HAMBURG, Germany’s largest container port, has reported a 3.4% slump in its throughput figures for the first quarter of 2016, as the woes of key trading partners Russia and China continue to weigh on its business. 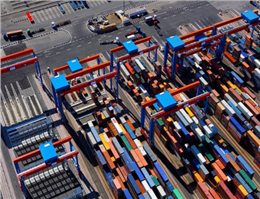 According to MANA The result means that of the three largest ports in Europe’s north European range, only Antwerp achieved volume growth in the first three months of the year, with Rotterdam also recording a drop in its box volumes.
Hamburg handled 2.2m teu from January through March, representing a fall of approximately 78,000 teu compared to the corresponding period of 2015.
The Hamburg Port Authority attributed the volume decline primarily to a slow start in trade with China and Russia, which also played a major part in the Helgoland Bay port’s significant slump in traffic last year.
Like other European ports, Hamburg was also impacted by void sailings on the Asia-Europe trade implemented by container line services in response to lingering overcapacity and weak demand. Hamburg’s volumes were also dented by the termination of the CKYHE Alliance’s NE8/CES loop as part of a major overhaul of the consortia’s Asia-Europe network.
Hamburg did however manage to secure some new liner services in the first quarter that helped to compensate for this loss in business, including a new Colombia fruit service operated by Maersk Line. This is in addition to the return of Iran Shipping Lines, which the port hopes to capitalise on by re-establishing itself as the key transhipment hub for cargo to and from Iran.
Last month, Rotterdam announced that it too had handled fewer containers in the three months leading up until March 31, due to what it called “unfavourable economic developments in China, Russia and Brazil”.
Europe’s biggest box port shifted 3m teu in the first quarter, a decline of 3.9% year on year.
In contrast, Antwerp, which is not as exposed to the collapse in Russian trade, saw volumes climb 4.6% to 2.5m teu to buck the trend of ailing throughput levels in the region similar to that which occurred in 2015. Last year, Antwerp was again the only port among the three to record positive volume growth.
0
Visit Home
Send to friends
Print
Newsletter
Share this news