Greek ports could face complete stoppage as the Port of Piraeus Dockworkers’ Union announced that they plan to launch repeated 48-hour strikes starting from May 26 in protest of the port’s privatizations process, the union said in a statement. 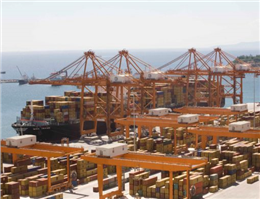 According to MANA, The strike, scheduled to launch at 06:00 local time, would affect traffic at the Piraeus port and the union said that the walkout could spread to other ports in the country.
Services that will be affected from the strike are porter’s service, stevedore’s service, cranes, gantry cranes and forklift service, as well as shuttle bus service into the port areas, Inchcape Shipping Services Greece confirmed.
The latest strike announcement follows a number of previous industrial actions as port workers’ unions in Greek ports protest against the sale of the country’s two biggest ports, the Piraeus and Thessaloniki.
Namely, the workers expressed their fear that the privatization could cost them their jobs as foreign port operators might introduce cheaper labor workforce.
In 2014, the Samaras Government launched the sale of the 67 percent stake of the Piraeus Port Authority (PPA) and Thessaloniki Port Authority (THPA), which are being privatized within the country’s bailout plan.
The agreement for the transfer of the majority stake in Piraeus Port Authority was signed in April between China’s port operator Cosco Group (Hong Kong) Limited and the TAIPED (Hellenic Republic Asset Development Fund).
Greece plans to invite investors to submit binding bids for a majority stake in the country’s second largest port in Thessaloniki at the end of September, Reuters cited sources close to the matter.
The previous industrial action blocked the container terminal operations at the port of Piraeus for three days and suspended all passenger traffic to and from all Greek ports, but it did not have any effect on Thessaloniki container terminal.
0
Visit Home
Send to friends
Print
Newsletter
Share this news