THE Panama Canal Authority has announced that the maximum allowable draft for vessels transiting the new set of locks will be 12.8 metres, or 42 feet, in tropical fresh water (TFW), starting from June 27. 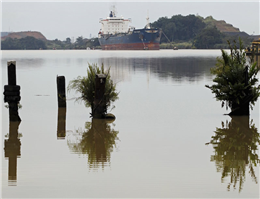 According to MANA, This draft limitation is based on Gatun Lake level projections and the weather forecast for the coming weeks.
The maximum allowable draft for vessels transiting the new Neopanamax locks has been set to 12.8 meters (42 feet) Tropical Fresh Water. The Panama Canal Authority (ACP) says the draft limits, effective as of June 27 when the expanded locks will open to commercial vessels, are based Gatun Lake water level projections and weather forecasts for the weeks ahead.
Earlier this month, conditions actually allowed the ACP to postpone a third round of draft restrictions set to enter into force on May 9 for the existing waterway, however those restrictions are now expected to become effective as of May 25. The third round of restrictions set a maximum transit draft of 11.59 meters (38 feet), down six inches from the limits currently in place.
The draft limits and ongoing drought in the Panama Canal watershed are an increasing cause for concern for shippers, and rightfully so considering the published draft limit of the new locks has always been 15.20 meters, significantly deeper the new posted limits.
The drought has been blamed on this year’s strong El Niño, which has historically brought dry conditions to the region. Luckily, El Niño is currently rapidly weakening, and forecasters are now calling for an increased chance of La Niña in the second half of 2016, which is known for bringing cool and wet weather to the southern portion of Central America.
An updated draft limitation will be announced at least four weeks prior to the opening of the new locks, a statement issued by canal authorities said, reported GAC Hot Port News.
0
Visit Home
Send to friends
Print
Newsletter
Share this news