Gwadar Port; China Attempts to Get Rid of U.S Dominance 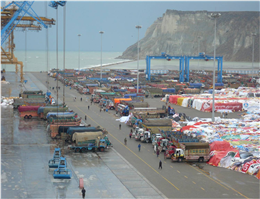 Ayaz Ahmed, the expert of port issues in Pakistan and the former deputy of a Research Institution at international affairs has considered new aspects of Gwadar Port in Pakistan in an Exclusive interview with MANA reporter.
1. As you had more or less pointed out, it is said that Gwadar Port is being established for military purposes. In fact, the port and its functions are a cover for the Chinese to be able to station their military installations and equipment there. In your view, how right of an interpretation could this be?
Yes China needs Gwadar Port to achieve its strategic objective of becoming an ‘impregnable naval power’ in the Indian Ocean. That will help it check the brewing Indo-US domination of the Arabian Sea, and use the port as an alternate sea route in case India blocks the Strait of Malacca. China would also establish a listening post here chiefly meant to acquire an effectual beachhead for observing the naval manoeuvres of the US in the Persian Gulf and those of India at nearby Indian bases of Gujarat and Mumbai. The prime objective behind these measures would be aimed at protecting Chinese Sea Lines of Communications (SLOCs) which bring about 60 percent of China’s energy requirements from the Gulf.
2. It is said that the technical and ecological infrastructures and port equipment in Gwadar is far beyond that of a large port. It seems more likely that the port is a megacity under preparation, and it is likely that later on, it is put to use for other purposes. Where do you stand on this?
Yes, but as soon as CPEC is completed and some Central Asia states agree to use Gwadar port for imports and exports, the capacity of the port would be expanded. However, since Chabahar Port is not plagued by an insurgency, Afghanistan and Central Asian states would tilt toward it in the foreseeable future.
Gwadar port would be used for military purposes if India increases its naval maneuvers in the Arabian Sea. Possibly, China will strive to seek permission from Pakistan for limited naval objectives calculated to neutralise the US-Indo efforts to contain China in the region.


3. In some part of the third-section article, you have remarked this issue vividly indicates that for Pakistan, Gwadar Port is both a strategic opportunity and a spot for creating challenges. Then you have added that Pakistani court is attempting to select a regulator, executive, judiciary organization, military bureaucracy and diplomacy to gain 100 % advantage of this port. What exactly do you mean by this? Could you elaborate on this?

Gwadar Port bestows Pakistan with marvellous strategic opportunities, which means gaining of overall or long-term military advantage. Via the port, Pakistan can export military-related products to the Gulf countries and Sri Lanka. Moreover, it would also help the navy in Pakistan to monitor the Indian counterpart in the Gulf of Aden; based on some credible sources, Indian navy has been supplying arms and ammunition to insurgents in Balochistan. Furthermore, the presence of Indian navy in the Arabian Sea poses a threat to Pakistan because India has equipped its navy with nuclear warheads , but Pakistan lacks the naval nuclear capability. As Balochistan is a major hub of international drug trade due to Afghanistan, Pakistan,s navy will have important bases at and nearby Gwadar to bust and stamp out the burgeoning narcotics trade.
I have argued that since Pakistan is faced with some international challenges owing to the incompetent judiciary, bureaucracy and executive, the government should plausibly and prudently reform these institutions so that they would not create challenges and hurdles for the port. More, these institutions will have to be fully ready for an imminent Cold War between China and America in the region. The US with Indian support would strive to encircle and contain China in the foreseeable future as it did to the former Soviet Union. So, the US along with India is presently engaged in fuelling insurgency in Balochistan in order to make the province unsafe and unstable for Chinese companies and nationals to work. Kulbasha Yadav, RAW agent, the incident is an example in this regard.
0
Tags: گوادر
Visit Home
Send to friends
Print
Newsletter
Share this news