Managing Director and head of Board of Directors of Islamic Republic of Iran Shipping Lines (IRISL) presented a lecture on “IRAN- ITALY SUMMIT” panel. He explained IRISL’s approaches during the post- sanctions era and its plans in the near future. 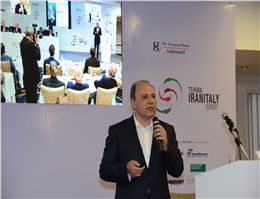 According to MANA, Describing IRISL’s situation as one of the prominent companies in Iran and Middle East, Dr. Saeedi said that Iran’s shipping lines are considered as the largest marine transportation fleet in Middle- East which is ready to provide services in cargo shipment and transportation sectors for businessmen.
He further added that transportation is the most crucial sector for businessmen and IRISL provides not only the most appropriate ways to achieve this goal but also it is ready to provide insurance, bank, and transportation for businessmen.
He hoped the inauguration of Iran-Italy bank’s deals and declared that banks should facilitate their services in order to quicken economic issues particularly, IRISL. So, I pleased the involved people to accelerate the process of cooperation between the two nations properly.
Considering the post- sanctions era and JCPOA, he remarked that the specific ways to cooperate with foreign countries have been provided and said: “I hope Italy to utilize the existed situation and to improve presupposed mutual cooperation with Iran”.
Explaining the performance of IRISL, he said that Iran’s marine fleet is operating in container carriers, bulk, passengers, tanker, offshore and training sectors. “We expect to execute promoted projects and programs in financing during the post- sanctions era”, he stated. Also, “we intend to boost our cooperation with other countries in the field of insurance and technology”, he added.
IRISL as the largest shipping lines company consists of different kinds of vessels such as container, bulk, general cargo and passenger. This fact shows IRISL’s high capacity in marine transportation.
“We are presenting good services in North and Khazar Sea. Meanwhile, Khazar Sea Shipping Company is operating with a large fleet in the zone”, he remarked.
He believed that this is a good opportunity for Italian counterparts to invest in carrying passengers sector through sea and stated that carrying passengers in Persian Gulf and Oman Sea is an excellent occasion and I encourage Italian companies to catch the existed opportunity.
Lifting of the sanctions leads to a quick promotion in cooperating with outstanding shipping companies worldwide. Meantime, it leads to the revival of IRISL shipping lines to Europe, Africa, East Asia and South America as well as setting up the agencies in the mentioned countries.
Referring to the establishing of regular shipping lines to Europe, this official figure added that we have activated our flag and insurance lines in classification societies without any facing problems since three months ago with the removal of the sanctions and now we are to improve it.
0
Visit Home
Send to friends
Print
Newsletter
Share this news