APM Terminals plans to upgrade its Pier 400 facility in Los Angeles in preparation for 20,000 teu ships on the Pacifc. 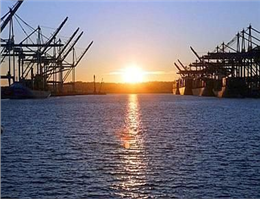 According to MANA,Pier 400 was the first terminal in the US to receive an 18,000 teu-class vessel when it handled CMA CGM Benjamin Franklin over Christmas.
However, the ship was not fully laden during that trial, and the French line has since decided not to put ships of that capacity on the Pacific on a regular basis yet, because of weak market conditions.
Nevertheless, terminals along the US west coast expect to see this class of ship on the Pacific at some stage, and Pier 400 had already indicated it was planning to extend the height and reach of its cranes.
That move has now been confirmed, with APMT signing a contract for the enlargement of 10 ship-to-shore cranes, including the raising of the overall height, and extension of the crane boom, to accommodate vessels of up to 20,000 teu.
The contract was signed at the Pier 400 facility by representatives of APMT and Shanghai-based ZPMC, which has been selected to modify the terminal’s existing cranes.
“Following the very successful handling of the 18,000 teu CMA CGM Benjamin Franklin at Pier 400 last December, the first call of a vessel of that size to any North American port, APM Terminals is continuing to lead the way with the infrastructure investment necessary to meet the needs of our customers, and the evolving requirements of American seaborne trade,” said APMT Pier 400 Los Angeles managing director Steve Trombley.
0
Visit Home
Send to friends
Print
Newsletter
Share this news