The world's largest cruise ship, Harmony of the Seas – which cost US$1 billion to build over 32 months – has been finished and was delivered to owner Royal Caribbean International. 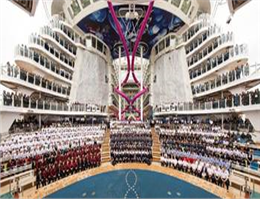 According to MANA, The immense floating town has 18 decks and will be able to carry 6,360 passengers and 2,100 crew members.
At 66 metres (217 feet), it is the widest cruise ship ever built, while its 362-metre length makes it 50 metres longer than the height of the Eiffel Tower.
Barcelona will be Harmony's home port for the next few months – it has 34 seven-night voyages scheduled, first sailing June 7 – before relocating to Port Everglades, Florida, for the winter Caribbean cruising season.
The ship was built for the US-based Royal Caribbean Cruises Ltd (RCCL) by the STX France boatyard in Saint-Nazaire on the Atlantic coast. It has 16 guest decks.
“It’s not only the biggest cruise ship in the world, it’s also the most expensive ever built,” said Richard Fain, head of RCCL, during a ceremony which featured blaring music and tightrope walkers performing splits over the aquatheatre at the back of the ship.
Richard said: “Harmony of the Seas is the product of our zealous spirit of continuous improvement, where we have combined revolutionary ship design with the technological strides that have defined the Royal Caribbean brand, Thank you to STX France for their ongoing partnership in building our ships, which continue to introduce unexpected industry innovations.”
0
Visit Home
Send to friends
Print
Newsletter
Share this news