SHANGHAI port's container throughput rose to 3.12m teu in April, its third consecutive month of year-on-year gain, according to the latest data from the Shanghai International Port Group, the main operator of the world's busiest container port. 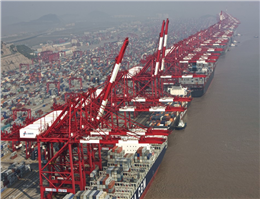 .According to MANA,The April throughput inched up by 0.3% from the year-earlier 3.11m teu, SIPG's website showed.
Month-on-month, the Shanghai port moved 3.9% more containers in April from the 3.0m teu in March. It was the second straight month-on-month rise.
For the first four months of the year, the Shanghai port handled 1.1% fewer containers at about 11.7m teu from 11.8m in the same period in 2015.
Last year, the Shanghai port’s container throughput rose 3.5% to 36.5m teu, putting it ahead of rival Singapore port which handled 30.9m teu, a contraction of 8.7% from a year earlier.
Singapore has yet to release April container throughput numbers but in March it handled 2.5m teu, almost 8% down from the 2.7m teu in March. The port, however, moved 5.6% more containers in March than the previous month's 2.4m teu data.
Singapore last month launched the first caisson for its Tuas Terminal Phase 1 project, a key pillar of the island-state's next-generation port.
Upon completion, the berths in Phase 1 will be able to handle 20m teu per year out of the total capacity of up to 65m teu for the whole Tuas terminal development, according to the Maritime and Port Authority of Singapore.
The Tuas Terminal will be developed in four phases over a period of some 30 years with the Phase 1 reclamation works scheduled for completion by the early 2020s
0
Visit Home
Send to friends
Print
Newsletter
Share this news