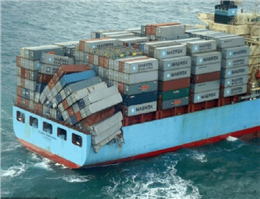 According to MANA, The collision, which took place, caused "severe damage" to the Safmarine Meru which caught fire and prompted its crew of 22 to abandon the vessel, Maersk Line said in a May 8 statement. The crew of both vessels are safe, the shipping line said.
"We are very relieved that our crew are safe and have not suffered any serious injuries," Maersk Line said. The safety of our people, at sea and on shore, is paramount to us," Maersk Line head of ship management Palle Brodsgaard Laursen said in the statement.
Chinese authorities were on the scene and that firefighting was initiated on the morning of May 8 local time, the statement said, adding Safmarine Meru was afloat and anchored.
"It is too early to comment on the circumstances surrounding the collision and fire," said Mr Laursen. "Our focus now is to put the fire out and get access to the vessel to assess damage to the vessel and cargo."
Maersk Line said that customers with cargo on board the Safmarine Meru would be contacted directly.
Safmarine Meru, which was built and 2006 and sails under the Hong Kong flag, had less than 400 full containers at the time of the collision. It was deployed on Maersk Line's TP18 service, the statement said. The 8,814-teu Northern Jasper, which was built in 2009, is owned by Norddeutsche Reederei H. Schuldt, according to the company's website.
0
Visit Home
Send to friends
Print
Newsletter
Share this news