Suez Canal terminal closed temporarily in wake of the incident. 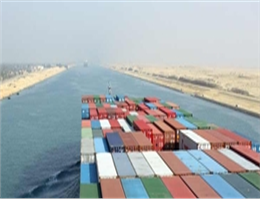 According to MANA, a Cosco-chartered boxship hit a gantry crane at a terminal at the northern entrance to the Suez Canal early Tuesday, temporarily shutting the site.
The stern of the 13,100-teu Cosco Hope (built 2012) hit the crane at the Suez Canal Container Terminal in Port Said, Egypt. One of the containers damaged in the accident contained chemicals, resulting in a large explosion at the site, according to a notice from Inchcape Shipping Services.
The ship, owned by Seaspan, was manoeuvring to exit Port Said at the time of the incident, according to the ship's manager, Seaspan Ship Management.
In a statement, Seaspan said the ship remains seaworthy, the crew is all safe, and no pollution occurred due to the incident.
The fire at the terminal was contained. Two shore staff suffered minor injuries. Inchape says operations within the terminal were resumed in the late afternoon local time.
The Cosco Hope, which suffered an identation on the starboard side of the hull transom, is classed by Lloyd's Register. Assuranceforeningen Skuld is the protection and indemnity provider for the ship
0
Visit Home
Send to friends
Print
Newsletter
Share this news