A member of Iran-Korea Collaboration Team stated: the visit of Korean President along with executives from 100 Korean companies and the interest of this economic team in building economic ties with Iranian firms highlights further developments in the economic relationships of the two countries in the near future. 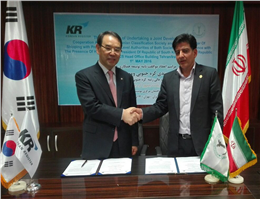 90% Progress in Iranian Classification Institute Membership in IACS
Later in the press conference, Dr. Park stated that the membership of Iranian Classification Institute in IACS has progressed up to 90 %, and the remaining 10 % will be progressed within a timed schedule. However, prior to becoming a member of IACS, Iranian had better apply to join the Asian Classification Institute. This application is currently being pursued by the Korean KR Institute, and we do hope that its membership is approved in the next round.
Regarding the future give-and-takes between the two countries, the Iran-Korea Collaboration Team member asserted that the visit of South Korean president along with the executives from 100 high-tech and industrial Korean companies to Iran indicates the interest of Korean president and the accompanying economic team to expand their ties with Iranian companies and institutes; therefore, it is predicted that the future economic ties between Iran and South Korean governments extend even further.
In response to MANA correspondent’s questions asking “What areas of investment in Iran do you recommend for foreign investors”, KR director replied Iran is a vast and great country and its oil and gas reserves have turned it into a strategic country. He suggested investments in fields such as energy extraction, transportation and export to foreign investors. Moreover, he counted exporting agricultural, petroleum and gas products as options worth considering.
Pointing out that Iran is a vast maritime country, Dr. Park asserted that Iran should not merely depend on its current fleet’s tonnage and age, rather it should take measures to expand it tonnage and renew its fleet; and South Korea stands by Iran in this field.
Regarding Iran and South Korea ties, he stressed that he has personally pointed out to Kim Seung-Ho, Korean ambassador in Iran, that expanding Iranian market and Iran-Korea ties needs further time and contemplation.
Korean KR classification director also emphasized that the first step to commence investment in Iran is that investors find reliable and cooperative partners since it is the key to success. In the end, he asserted that KR could faithfully aid Iran in maritime classification since KR is the core organization in South Korea’s maritime activities, and it could proceed with the mutual collaboration with its counterpart in Iran (i.e., Iranian Classification Institute).
0
Visit Home
Send to friends
Print
Newsletter
Share this news