The world’s only nuclear-powered container ship Sevmorput is being readied to transport building materials to Russia’s new military base on Kotelny Island in the New Siberian Islands. 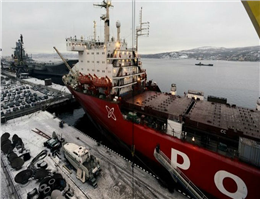 According to MANA ,The vessel is being loaded with building materials at Murmansk port, and is expected to depart on May. The voyage will be the ship’s first along the Northern Sea Route in ten years.
The 260 meter long, 61,000 dwt Sevmorputwas built in 1988. After decades of service along the Northern Sea Route, the vessel has been idle until it was readied for service again with works starting in 2013. Sea trials have been conducted over the last six months.
The vessel, originally built at the Zaliv yard in the Ukraine, was a unique contribution to the Soviet fleet of civilian nuclear vessels when it entered service in 1988. Until then, the world had seen only three other nuclear powered civilian merchant ships, all of which ended up as failed experimental vessels, says the Independent Barents Observer.
Sevmorput is powered by a single KLT-40 nuclear fission reactor with a thermal output of 135 megawatts. Unlike the Russian Arktika and Taymyr class nuclear icebreakers, which have three fixed-pitch propellers and use a nuclear-turbo-electric powertrain,Sevmorput features a single four-bladed, ducted controllable-pitch propeller mechanically coupled to a steam turbine.
.Sevmorput is anticipated to play a key role in the transport of military personnel to Russia’s new and upgraded Arctic bases as well as transporting cargo to the new Pavlovsk lead and zinc mine in Novaya Zemlya.
0
Visit Home
Send to friends
Print
Newsletter
Share this news