Oman plans to build a major oil storage terminal on its southeastern coast, spending between $300 million and $400 million on the first phase, Minister of Oil and Gas Mohammad bin Hamad al-Rumhy said on Saturday. 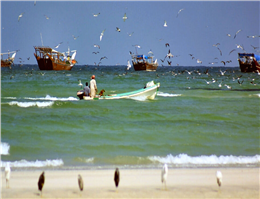 According to MANA,It will be built by a subsidiary of state-owned Oman Oil Company (OOC) at Ras Markaz, about 70 kilometers (45 miles) from Duqm, where the government is developing a port and industrial zone, the state agency in charge of the zone quoted Rumhy as saying.
Rumhy did not give a timeline for construction.
Low oil prices have strained Oman's state finances and made it harder to fund big infrastructure projects. Rumhy said the terminal would not be financed by the state but through borrowing from banks, including internationally.
Ras Markaz is on the Arabian Sea near major shipping routes through the Red Sea to Asia and Africa, and lies outside the crowded Strait of Hormuz, which is vulnerable when political tensions in the region rise.
In its first phase, the storage facility will have a capacity of between six million and 10 million barrels of oil and serve an oil refinery planned for Duqm. Capacity could be expanded to as much as 200 million barrels.
"OOC will continue to develop the project and increase the number of tanks, according to the level of demand in the oil storage market. Our ambition for Ras Markaz is to be one of the largest oil storage hubs worldwide," Rumhy said.
0
Visit Home
Send to friends
Print
Newsletter
Share this news