<![endif]--> Extending IRISL's Success to Other Economic Sectors of the Country

Extending IRISL's Success to Other Economic Sectors of the Country

In a meeting with the director and the senior executives of Islamic Republic of Iran Shipping Line (IRISL), Ayatollah Hashemi Rafsanjani expressed his happiness with the lifting of the sanctions, particularly with the international activities of Iranian fleet. He considered using international interactions to move toward social welfare and conquering the peaks of prosperity a legitimate right for Iranian people. 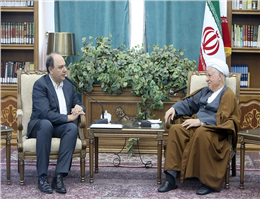 Criticizing those who are implying the failure of Joint Comprehensive Plan of Action (JOCPA), the Chairman of the Expediency Discernment Council remarked that currently, important countries, organizations and international holdings worldwide are competing with each other to invest in Iran and collaborate with us.
According to the Public Relationship Office of the Expediency Discernment Council, MANA reported, Ayatollah Hashemi Rafsanjani elaborated on Iran's geographical position in the Middle East, and pointed out to the rises and falls of political events. With reference to the narrow-mindedness of Persian Gulf Southern States authorities, Hashemi Rafsanjani stressed that life's facts and man's history highlight that political narrow-mindedness of this type is only temporary, and when rationality returns to some countries, neighboring nations will start cooperating with us.
Recounting the statements of some European authorities who have visited Iran in the recent years, Hashemi asserted that any figure he had met had expressed his interest in building economic, scientific, cultural and social ties with Iran.
Ayatollah Hashemi Rafsanjai deemed intense propaganda of Iran's government opposition to disappoint people as an act against the national interests, and further stated that political and faction-based approaches to national and public interests and unfair criticism of general state-related issues is in no way justified while the whole world is acknowledging Iran's success in nuclear negotiations.

The Chairman of the Expediency Discernment Council considered JCPOA achievements to be mutual; and analyzing the why and the how of some countries' concerns regarding Iran's nuclear activities, he stated that their real concerns were the scientific growth of Iranian youth, otherwise Iran's supreme leader's political-religious fatwa clearly considered building nuclear bombs haram. This science is now localized in Iran, and it is irreversible. Referring to Iran's macro-policies, he added what Iran wants in its peaceful nuclear activities has strong roots in Islamic culture and Iranian civilization.

Counting various benefits of nuclear energy and its significance in agriculture, hygiene and medical matters, Ayatollah Hashemi Rafsanjani emphasized there is no rational justification to deprive a nation from the countless merits of nuclear technology, by just accusing them of moving toward nuclear bomb.
Pointing out the differences between the foreign political indices of the current administration and IRI's previous government, the Expediency Discernment Council chairman stated that the wise and sensible vision of the current administration and negation team's emphasis on logic and reasoning has helped improve Iran's international picture to what it is today, enabling Iranian ships to sail to any destination in any corner in the world.
Expressing his satisfaction with the activities of IRISL and Dr. Saeedi himself, Ayatollah Hashemi Rafsanjai asserted that IRISL's business booming indicates the progress of Iran's economy, and attempt must be made that such booming in economy is also created on non-petroleum exports.

At the opening of this meeting, Dr. Mohammad Saeedi, IRISL director and the chairman of the board, introduced this organization's executives and as well, submitted a report on IRISL activities and plans in the recent years. Delineating the constructive impacts of post-JCPOA in the shipping industry, Dr. Saeedi asserted that currently, Iranian ships, flying Iran's holy flag, are not facing any restrictions in entering international waters and docking at ports worldwide. This is, he added, a result of JCPOA.
0
Visit Home
Send to friends
Print
Newsletter
Share this news