<![endif]--> Arin Bank Branch Will be Inaugurated in Chabahar

Arin Bank Branch Will be Inaugurated in Chabahar

The director of Chabahar Free Industrial-Trade Zone Organization stated that Chabahar is fully prepared to cooperate with Afghanistan Arin bank for the purpose of the establishing a branch in this region. 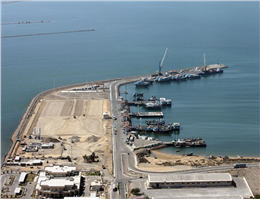 Hamid Ali Mobaraki , the Head of the Board and the director of Chabahar Free Industrial-Trade Zone Organization sat with the heads of supervisors and executive delegation of Arin Bank ,MANA reported, in this meeting, both sides assessed and evaluated the issues regarding the inauguration of a bank branch in Chabahar.
Counting Afghanistan as a key target , Mobaraki added: Chabahar should be looked as a source which provides the necessary opportunities for Afghanistanian young activists.
Making  a reference to the visiting of foreign corporations from Chabahar Free Industrial-Trade Zone by various countries such as South Korea, India, China, and Afghanistan, he asserted: developmental activities in Chabahar in the fields of promoting ports and building railway have experienced an increasingly growing trend.
He emphasized : the role of Free trade Zones in the general policies of resistance economy is prominent and considerable.
The director of Chabahar Free Industrial-Trade Zone Organization stated: his organization is willing to cooperate with Arin Bank for establishing a branch in this region.
It should not be left unmentioned that Arin Bank has been registered with the Iranian, Saderat Bank and Meli Bank stockholders in Afghanistan ,it also possesses branches in Kabol and Afghanistan. the inauguration of another branch in India and Chabahar, Mobaraki added, is among the future prospects plans of this bank
0
Visit Home
Send to friends
Print
Newsletter
Share this news