CONTAINER throughput in the Port of Hong Kong fell 10.4% year on year to 4.41m teu for the first quarter of 2016, signalling a continued contraction at what was once the world’s busiest container harbour. 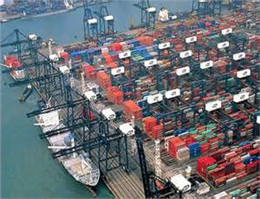 According to MANA,Total box handling in March stood at 1.52m teu, down 8% compared with the same period last year, according to statistics from the city’s Marine Department.
The results came with the announcement that the Port of Qingdao, a pivotal port in northeast China, recorded 4.8% growth in container throughput to 4.42m teu in the first three months of this year.
The comparison suggests that Hong Kong, home to the world’s fifth busiest box port in 2015, might see its position in the industry further weaken this year.
The Port of Hong Kong was ranked number four in 2014, yet was surpassed by the Port of Ningbo last year.
The prospects of the city’s port are overshadowed by a string of problems, including obsolete infrastructure, land constraints and high labour costs.
The Hong Kong government has been mulling over some solutions.
One of them is to integrate six pieces of nearby land totalling 18.5 ha into Kwai Tsing Container Terminals in a bid to increase container storage capacity and barge berths, as well as to improve handling efficiency, according to the Transport and Housing Bureau.
The new land areas are expected to come into use in July at the earliest.
Meanwhile, policy makers are ramping up efforts to ink a free trade agreement with the Association of Southeast Asian Nations, the city’s second largest trading partner within this year, Hong Kong chief executive Leung Chun-ying said in December last year. The deal, if realised, could also give a boost to cargo traffic in the port.
Nevertheless, the decline in container throughput might still be difficult to reverse.
Hong Kong’s port, as a transhipment harbour for cargoes mainly focused on China’s exports and imports, can inevitably lose its attraction to its mainland peers, which are closer to the hinterland and opening up foreign trade
0
Visit Home
Send to friends
Print
Newsletter
Share this news