HANJIN Shipping and Hyundai Merchant Marine, South Korea's biggest container shipping lines, have denied interest in pursuing a merger following this week's shake-up in the container shipping sector, but are in talks with other shipping companies with regards to their alliance plans. 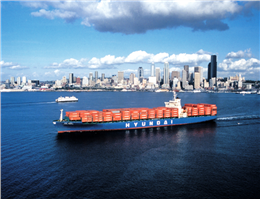 According to MANA,Hapag-Lloyd and United Arab Shipping Co announced on Thursday that they were discussing a possible merger. The news came a day after four top carriers — CMA CGM, Cosco Container Line, Evergreen and Orient Overseas Container Line — announced a new mega alliance.
The alliance has been widely expected to trigger changes in the existing alliances covering the east-west trades, namely the G6, Ocean Three and CKYHE.
"There is no change in our determined stance that we are not considering a merger with Hanjin Shipping," an HMM spokesman said when asked for comments following news of the mega alliance and the merger talks between UASC and Hapag-Lloyd.
"We are currently discussing future plans with other alliance members," he said, adding that HMM would stay in the G6 Alliance until March 2017, when its membership ends with the group, which also comprises Mitsui OSK Lines, NYK Line, APL, Hapag-Lloyd and OOCL.
Hanjin Shipping also said it was not considering a merger with HMM following recent events in the sector.
On its shipping alliance plans, Hanjin Shipping "is in discussions with some of the shipping companies", a spokesman said, but declined to give details. Hanjin is a member of CKYHE, which includes Cosco, K Line, Yang Ming Marine and Evergreen.
Hanjin Shipping has a 3% share of the world's container line fleet while HMM has 2%, according to the latest data from Alphaliner.
Both South Korean lines are seeking to boost their liquidity. Hanjin Shipping, South Korea's largest shipping line, is facing a creditor-led restructuring, following a similar move by its rival HMM.
0
Visit Home
Send to friends
Print
Newsletter
Share this news