The wreck of the Sewol ferry, which sank exactly two years ago taking more than 300 people with it, could emerge from the water off South Korea’s southern coast by the end of July 2016, according to South Korea’s Ministry of Oceans and Fisheries (MOF). 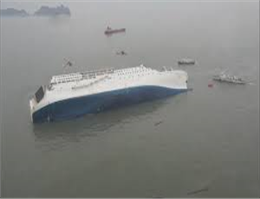 The salvage operation, which will be undertaken by a Chinese consortium led by Shanghai Salvage, is expected to start next month and should be concluded before the end of July, depending on weather conditions at the site.
According to the country’s latest plans, the 6,825-ton passenger ship will not be cut, but will be hoisted in one piece, in order to keep any remains of the still missing people inside the wreck.
MOF initially estimated the salvage costs to be around USD 139 million, however, Shanghai Salvage reportedly offered to raise the 146-meter-long ferry for around USD 75 million.
Salvage experts started the underwater inspection of the sunken Sewol ferry at the end of August.
The salvage crews are said to be trying to make the ferry lighter by injecting air into 10 tanks and installing buoyant materials, including airbags and pontoons onto the vessel.
The authorities also plan to place a net around the Sewol to prevent any bodies still trapped inside from being lost in the salvage process.
The Sewol ferry sank off Jindo Island on April 16, 2014, killing 304 people, 250 of which were high school students on a school trip.
Nine passengers from the ferry, which sank in 44 meters of water, still remain unaccounted for.
0
Visit Home
Send to friends
Print
Newsletter
Share this news