CHINA's Shanghai port handled 3m teu of containers in March, up 16% from the previous month and 2.1% more in the same month a year earlier, data from Shanghai International Port Group, the main operator of the world's busiest container port, showed. 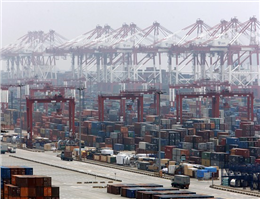 According to MANA, A total of 8.5m teu were moved in the first quarter of 2016, down 1.6% from the first three months of 2015, SIPG said.
The jump in March container throughput followed a pickup in two key gauges of Chinese factory output in March.
China's official manufacturing purchasing managers index increased to 50.2 in March from 49.0 in February. The private Caixin manufacturing PMI rose to 49.7 in March from 48.0 in February. China is due to release trade data on April 13.
In March, SIPG said it recorded Yuan6.6bn ($1bn) net profit for 2015, down 3% from a year earlier on the back of China's slowing economy and flagging foreign trade.
Last year, the Shanghai port’s container throughput rose 3.5% to 36.5m teu, putting it ahead of rival’s Singapore which handled 30.9m teu, a contraction of 8.7% from a year earlier.
0
Visit Home
Send to friends
Print
Newsletter
Share this news