Asia-Europe traffic down nearly 12% in February

CONTAINER volumes on Asia-Europe services slumped nearly 12% in February against the corresponding month of 2015, as the notoriously quiet period just before and after the Lunar New Year put pay to any turnaround in fortunes for the struggling trade. 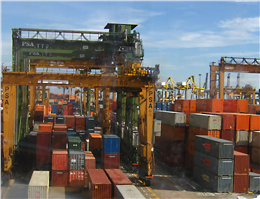 According to MANA,Following on from a 1.9% drop in traffic in January, volumes travelling between Asia and Europe in February were down 11.9% year on year, from 1.2m teu to slightly over 1m teu, according to the latest figures published by Container Trades Statistics.
Volumes so far this year, therefore, are currently tracking 6.8% behind those handled on the trade between January and February 2015.
At a regional level, boxes travelling to northern Europe from Asia were recorded at 663,980 teu in February, representing a 14.7% decline on levels witnessed in 2015.
Those travelling from Asia to the east Mediterranean and the Black Sea fell 7.8% to 187,596 teu, while those on the Asia-west Mediterranean and North Africa trade slumped 15% to 177,405 teu.
The CTS Index for the Asia-Europe trade, meanwhile, having climbed back up to 52 points in January, fell back down to 44 points and there is every chance it could slip to a new all-time low in March.
0
Visit Home
Send to friends
Print
Newsletter
Share this news