THE Suez Canal Authority is offering a 30% discount on canal tolls for vessels returning from the US east coast to Asia in what appears to be an effort to counter the upcoming opening of the new locks on the Panama Canal and the trend for vessels on the backhaul leg to avoid the Suez Canal by going around the Cape of Good Hope. 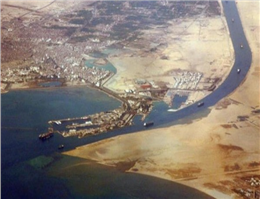 .According to MANA,In a circular seen by Lloyd’s List, the SCA says: “Containerships coming from Port of New York and its southern ports heading to Southeast Asian ports (Port of Port Kelang and its eastern ports) shall be granted a reduction of 30% of the Suez Canal normal tolls.”
The SCA stipulates the vessel must not call any port in between two areas and the vessel’s operator must forward a formal declaration to that effect.
Carriers must also submit a certificate from the last port of origin, stating the date of departure and provide a similar certificate from the first port or arrival within 60 days of the Canal transit.
The vessel’s agent must undertake to repay the reduced amount in case of the vessel making additional calls or failing to submit the correct documentation, the SCA says.
This trial period is in effect already, and will last until June 5, 2016, although it may be renewed.
The move comes as the Suez Canal suffers from the slowdown in global shipping and moves by container lines to save costs by routing some backhaul legs around southern Africa instead of paying to transit the canal..
Last year, the SCA earned $5bn from transit fees and there are some questions over whether it will be able to hit its target at a time when world trade growth is sluggish and only expected to grow at a rate of no more 4% a year.
Moreover, the Suez Canal will soon be facing competition from rival Panama Canal, which is due to open its expanded third set of locks in June, allowing ships of up to 14,000 teu to transit the canal.
While the impact of the new locks is yet to be determined, carriers accessing the US east coast will have another option for taking larger vessel via the Panama Canal instead of via Suez, putting additional pressure on the Suez Canal.