TWO of the world’s largest containerships are currently idle as lines struggle to match capacity with weak demand. 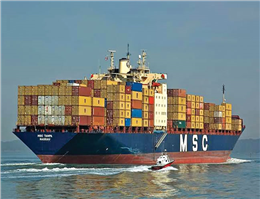 According to MANA,The 19,224 teu MSC Oliver and MSC Maya have joined other containerships at the Jangseungpo anchorage near to Busan, according to Lloyd’s List Intelligence data.
Together with MSC Oscar and MSC Zoe, sisterships MSC Oliver and MSC Maya are the biggest in service in terms of capacity.
All were delivered between late 2014 and mid 2015, and are named after the grandchildren of MSC founder Gianluigi Aponte. They are the first four of 20 ships of this class that MSC has in operation or on order.
MSC Oliver has been deployed in the Albatross service between Asia and Europe, calling at Dalian, Busan, Qingdao, Ningbo, Shanghai, Xiamen, Yantian, Tanjung Pelepas, Algeciras, Le Havre, Rotterdam, Bremerhaven, Felixstowe and Tangier.
MSC Maya was operating within the Swan service between Busan, Gwangyang, Shanghai, Ningbo, Yantian, Tanjung Pelepas, Felixstowe, Bremerhaven, Gdansk, Bremerhaven and Rotterdam.
Both services are part of the 2M alliance with Maersk Line.
It is unclear when the two ships are due to return to service.
AIS data show both MSC Oliver and MSC Maya appear to have been at anchor since about March 12.
Other ships in the same anchorage include Hapag-Lloyd’s 8,800 teu Sofia Express and the 8,500 teu CMA CGM Nabucco
LLI defines short-term vessel inactivity as no reported movement for between five and 24 days. Long-term lay-up applies to those ships that have not moved for more than 24 days.
At the end of March, 317 vessels representing 4.2% of the global fleet were idle, according to LLI. This was up from only 3.6% at the end of February.
0
Visit Home
Send to friends
Print
Newsletter
Share this news