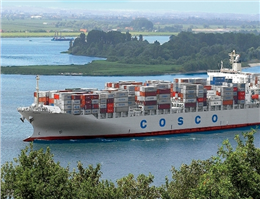 According to MANA,THE industry had been rife with speculation that China Cosco, having acquired the entire boxship fleet and network of China Shipping Container Lines, was in talks with CMA CGM and several other major operators to create a new shipping alliance.
But the Chinese carrier had stayed out of the media spotlight regarding the topic before Wang Haimin, China Cosco’s deputy general manager, finally broke the silence during a press conference late last week.
“We are having further discussions with some related carriers. Generally speaking, we want more scale,” Mr Wang said.
Mr Wang, however, did not specify which carriers were involved, only noting that the new partnership was expected to serve China Cosco’s strategy to be “truly globalised” by expanding its fleet presence beyond current East-West trades to South-North and non-China related lanes.
“When forming a new alliance, we will select candidates that have a better match with our globalisation strategy,” Mr Wang said.
Both China Cosco and CSCL have a heavy focus on China-Europe and transpacific trades, where rates are depressed with prospects for a near-term recovery dim.
Gaining dominance along the major routes is important, but expansion into other markets with growth potential is also crucial for the merged fleet to extend customer range and boost flagging revenue.
This has made more sense for a Sino-French tie-up, as the Jacques Saadé-led company has already built a strong footprint in those markets.
One source from China Cosco told Lloyd’s List that the company’s ships are actually carrying more cargoes between China and France nowadays, including material used to build nuclear power stations.
“The future box liner industry is not only a competition among individual players but also a one among alliances,” Mr Wang said.
Nevertheless, he added that China Cosco and CSCL will remain in their respective alliances until the end of this year, as a deal has yet to be finalised.
China Cosco is in the CKYHE alliance, whose members include K Line, Yang Ming Marine Transport, Hanjin Shipping and Evergreen Line, while CSCL is in the Ocean Three alliance along with CMA CGM and United Arab Shipping Co.
While waiting for the alliance reorganisations to take place, some overseas initiatives are already in the works.
“This year’s priority is to develop markets in South Asia and the Middle East, including India, Pakistan, Myanmar and Iran,” Mr Wang said.
“We are increasing vessel capacity and manpower in those areas”.
Another main target is the Caribbean, where regional trade has been growing fast.
“We’ll invest more in regional routes,” Mr Wang said, adding that Africa will be the next target