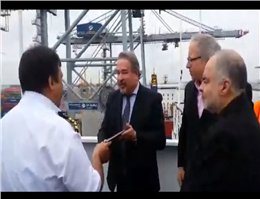 According to MANA, a cargo ship belonging to Iran's IRISL docked at Antwerp as her second port, becoming the first Iranian ship to reach Europe after a hiatus of over six years.
The first container ship from IRISL’s fleet after six years arrived to the port of Antwerp, Belgium as 2nd  European port on her own path to Europe.
The MV.Azargoon one of container ship owned by IRISL fleet in late March with the loading and unloading of goods at the port of Hamburg, had left this port and arrived and berthed in port of Antwerp, Belgium.
IRISL container ship fleet by implementing JCPA and after six years of sanctions, was welcomed by President of port of Antwerp and Chris Adams, head of DPW terminal of the port and the other port officials.
A plaque of port of Antwerp was presented to commander of vessel by Harbormaster of this port.
MV.Azargoon was also welcomed in the port of Homburg by port authority in late March as her first port of call in European ports.
The cargo operation of  MV.Azargoon have already begun and after cargo loading, the Persian Gulf would be her next call.
0
Visit Home
Send to friends
Print
Newsletter
Share this news