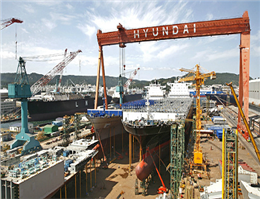 As disclosed by Yonhap, HHI has been notified by the country’s tax authorities of the additional tax imposition and the shipyard is considering to file for a review of the matter.
The shipbuilder has seen major losses during the previous two years due to an overall industry downturn. Namely, HHI was affected by a contract cancellation of a semi-submersible rig and massive losses in the offshore business but the company is now looking to get back to black.
In an effort to return to profitability last year, the company’s CEOs gave up their salaries in November, while HHI agreed with its workers to freeze the base pay of yard employees and distribute a 100 percent bonus increase, plus an additional USD 1,283 (KRW 1.5 million).
Furthermore, in January the company decided to slash its order target for 2016 to USD 19.5 billion, compared the previous year’s target of almost USD 23 billion.
All the said measures were taken to try to cut costs as the company hopes to return to profit this year.
0
Tags: هیوندای
Visit Home
Send to friends
Print
Newsletter
Share this news