The number of people who could be displaced in U.S. coastal regions due to rising sea levels this century as a result of climate change is much higher than previously thought, with more than 13 million Americans at risk with a 6-foot (1.8 meters) rise including 6 million in Florida 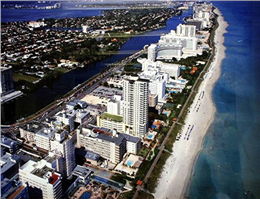 , The researchers assessed sea level change scenarios by 2100 from the U.S. Oceanic and Atmospheric Administration for coastal states along with population growth trends and projections in high-risk areas.
With a sea level rise of 3 feet, locations forecast to house 4.2 million people would be at risk of inundation while a doubling of the rise would bring the number to 13.1 million. With densely populated coastal locales, Florida faces the greatest risk, with up to 6.06 million residents projected to be affected if sea levels rise 6 feet, followed by Louisiana (1.29 million people at risk) and California (1 million).
Other states that could be heavily impacted in such a scenario include: New York (901,000 at risk), New Jersey (827,000), Virginia (476,000), Massachusetts (428,000), Texas (405,000), South Carolina (374,000) and North Carolina (298,000). "As the sea level rises, coastal parts of Florida will be inundated," said University of Georgia geography professor Deepak Mishra, one of the researchers. "Sea level rise is the phenomenon that makes climate change a reality for millions of people worldwide. The sheer volume of people at risk of displacement and becoming climate refugees is the main threat." The projections of the number of people who could be displaced are up to three times larger than previous estimates, added University of Georgia demographer Mathew Hauer, the study's lead author. "These results suggest that the absence of protective measures could lead to U.S. population movements of a magnitude similar to the 20th century Great Migration of southern African-Americans," the researchers wrote in the journal Nature Climate Change, referring to the movement of more than 6 million black people from the rural South during an era of institutionalized racism to cities of the North, Midwest and West from the 1910s until 1970. The researchers said more than a quarter of residents of major urban centers such as Miami and New Orleans could face coastal flooding. Three counties could see the displacement of 80 percent of their population: Florida's Monroe County, site of the Florida Keys; and North Carolina's Hyde and Tyrrell counties.
0
Tags: Sea Level
Visit Home
Send to friends
Print
Newsletter
Share this news