Somali al Shabaab fighters have seized a small port in the semi-autonomous Puntland region, the latest sign of a resurgence inactivity by the Islamist militants in the Horn of Africa nation. 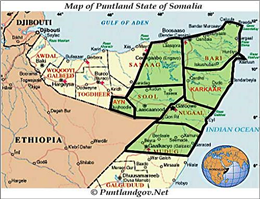 The head of the local authority in the port town of Garad, Abdinur Abdullahi, said that al Shabaab with foreign fighters had met local elders, saying they would "capture many places and fight non-Muslims."
"Most of the residents have fled," he said, adding al Shabaab had been building up forces in the Galgala Hills, echoing comments previously made by officials in Puntland.
There was no immediate comment from al Shabaab.
Garad is a former haven for pirates, who had used the natural port to mount raids on commercial ships passing along nearby shipping lanes leading to and from the Red Sea.An international naval effort has largely driven the Somali pirates away. There have been only a few reports of hijackings in the past two or three years, mostly involving fishing boats not the major tankers or commercial vessels targeted before.
0
Tags: سومالی
Visit Home
Send to friends
Print
Newsletter
Share this news