HMM swings to loss in 2015 from year-earlier profit

HYUNDAI Merchant Marine, South Korea's second-biggest shipping company, incurred a net loss of Won627bn ($527.4m) for the whole of 2015 from a Won21.8bn profit a year earlier, according to its consolidated financial statement. 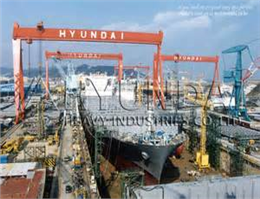 Sales fell to Won5.7trn last year, down 12.3% from Won6.5trn in 2014 while operating loss stood at Won253.5bn last year, 7.9% lower than the previous year's Won235bn loss, HMM said, without elaborating.
The fourth-quarter was a big drag to the South Korean company's performance as for the first nine months of 2015, its net loss stood at Won218.8bn, about 34.9% of the full-year amount. Its nine-month operating loss amounted to Won126.9bn, about half of the full-year amount.
The highly-leveraged HMM saw its debt ratio at 2,007% in 2015 from 960% the previous year.
Early this month, the carrier said Hyundai Group chairwoman Hyun Jeong-Eun decided to resign from her position as HMM's chairwoman. The resignation will enable HMM's board to "smoothly carry out decision-making" for an additional self-rescue plan arranged through consultation with main creditor Korea Development Bank.
The carrier needs to boost its liquidity and in February started negotiations with shipowners to reduce charter payments. It also asked creditors who hold Won120bn worth of publicly placed bonds due in April for a renegotiation.
HMM said its creditors, including KDB, will co-operate in modifying HMM’s debts if the agreements on the charter cut and publicly placed bonds are completed successfully. KDB, for one, will proceed with a debt-equity swap worth Won800bn if HMM is able to negotiate for charter cuts.
A creditors meeting will be held on March 17.
Earlier this month, HMM also said it plans to reduce capital to Won173.2bnfrom Won1.2trn as of April 21 to help improve its balance she. “We decided to take pre-emptive action by improving our financial sheet through share consolidation,” HMM said.
A company could be subject to delisting if it has 50% or more of its capital impaired for two consecutive years, it added. The capital reduction plan will be presented to shareholders for approval at a meeting on March 18.
Trading of HMM shares will be suspended from April 20 to May 4. The stock will resume trading on May 6.
Among its fund-raising efforts, HMM is selling its 22.4% stake in Hyundai Securities. As of end-February, four private equity firms have submitted letters of intent to acquire a 22.56% stake in Hyundai Securities.
Hyundai Group chairwoman and her mother Kim Moon-Hee own the remainder of Hyundai Securities stakes to be sold that HMM does not own.
HMM has also received a Won30bn cash infusion after issuing new shares to Hyundai Group chairwoman and her mother, a stakeholder in HMM’s biggest shareholder Hyundai Elevator.
HMM has agreed to sell its dry bulk dedicated business to Hanh & Co, a South Korean private equity firm and owner of H-Line Shipping, for $450m, including $350m in debt. The deal is expected to be closed this month
0
Visit Home
Send to friends
Print
Newsletter
Share this news