The director of Khuzestan Province Transportation and Terminals announced: Imam Khomeini port experienced the transportation of 13. 250.000 tons of goods in the current year. 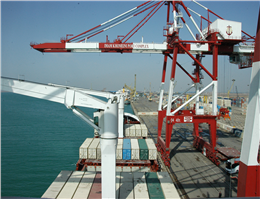 In an interview with MANA correspondent, Masood Mosadeghi remarked; this figure of transportation highlights a 15-percent rise in comparison with the same period in 2014.
According to Mosadeghi, wheat, grains, popcorn, oil cake and soya constitute the majority of the volume of goods transportation, which have been loaded and carried through Road Transportation Fleet.
The director of Khuzestan Province Transportation and Terminals speculated that with the launching of the second line of Ahvaz-Imam port railway track, Imam port’s railway transportation portion would be increased.
It should not be left unmentioned that the second line of Ahvaz-Imam port railway track was launched in February2013 as long as 100 km.
Imam Khomeini Port with the capacity of annual 50 million tons of embarkation and disembarkation, holds the second largest rank operational port rank among other Iranian ports, moreover, the top rank is occupied by Shahid Rajaee Port in Hormozgan Province.
0
Visit Home
Send to friends
Print
Newsletter
Share this news