The U.S. Navy will likely increase its requirement for a 308-ship fleet given the rapidly changing world security situation, including the U.S. battle against Islamic State, Chief of Naval Operations Admiral John Richardson said on Thursday. 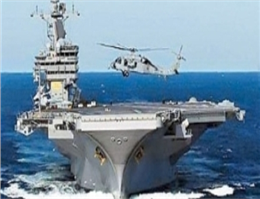 Richardson said the Navy was reviewing an assessment completed in 2012 and updated in 2014, before Russia's reemergence as a "global power competitor," and the start of the U.S.-led campaign to defeat Islamic State militants in Iraq and Syria.
"I would bet a paycheck that it's going to be a number greater than 308 ships, just by virtue of the additive nature of the complexity and the contestants that are confronting us right now," Richardson told an event hosted by Washington defense consultant Jim McAleese and Credit Suisse.
The top U.S. naval officer said the Navy was already increasing its purchases of Virginia-class submarines built by General Dynamics Corp and Huntington Ingalls Industries Inc., but would also invest in unmanned vessels.
The study is due to be completed this summer in time to inform the Navy's fiscal 2018 budget proposal, according to a Navy official. The Navy's fleet is currently around 285 ships.
Republican lawmakers have repeatedly called for an increase in the size of the Navy's fleet, arguing that the sheer number of threats around the world requires more ships to help the United States "project power."
Others argue that today's ships are more capable and advanced than in years past, increasing the power and capability of each ship and making the larger fleets of the 1980s unnecessary.
0
Tags: ناو آمری‌کایی
Visit Home
Send to friends
Print
Newsletter
Share this news