THE Chinese port of Shanghai, the world’s busiest container port, moved slightly more boxes in February compared with the same period a year earlier, according to data from operator Shanghai International Port (Group). 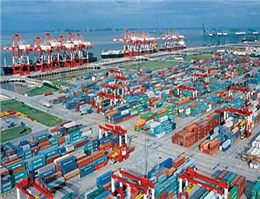 According to MANA,The port handled 2.59m teu, marginally higher from 2.57m teu in the same period a year earlier, the SIPG figures posted on its website showed.
Month on month, the port handled 11.9% fewer boxes from the 2.94m teu registered in January. No explanation was provided in the website.
However, the week-long Chinese New Year holidays fell in February this year. China’s exports plummeted 25.4% in February this year from a year earlier while imports dropped 13.8% year on year.
The combined January-February exports, which should address some of the holiday effect, declined 17.8% from a year earlier and imports slid 16.7% year on year.
For the first two months of 2016, Shanghai moved a total throughput of 5.53m teu, down 3.5% from 5.73m teu in the same period last year.
In 2015, Shanghai's container throughput rose 3.5% to 36.5m teu, putting it ahead of rival Singapore, which handled 30.9m teu, a contraction of 8.7% from a year earlier, following five consecutive years of throughput increases.
0
Visit Home
Send to friends
Print
Newsletter
Share this news