The Capesize bulk carrier New Katerina has been refloated and towed away from its grounding site in the Suez Canal where it spent almost two weeks. 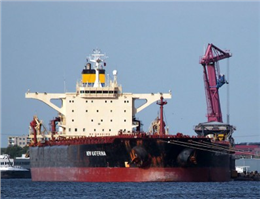 The Panamanian-flagged ship has now been anchored to Al Ballah Corridor, GAC confirmed to World Maritime News.
As a result, Suez Canal convoys are about to resume their daily operations as per schedule without further delays.
The refloating was made possible as the bulker’s iron ore cargo, destined for Qingdao, China, was lightened enabling the Suez Canal Authority’s salvage teams to pull the ship free.
The ship’s breached hull also had to be sealed so as to prevent water ingress into the ship’s fore part that has sustained considerable damage due to the grounding.
The 1997-built bulk carrier was en route from Yuzhniy, Ukraine to China when it struck an embankment having lost steering gear on Thursday, February 25th.
0
Visit Home
Send to friends
Print
Newsletter
Share this news