5-percent of the operation of exports, imports, and transit of goods is conducted on Shahid Bahonar Port. 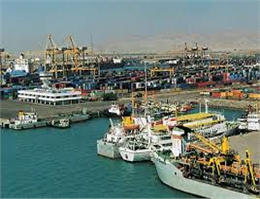