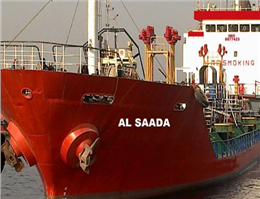 According to MANA,"We have lost two Indian sailors Mahesh Kumar Rajagopal and Deepu Lathika Mohan due to fire in a vessel Al Sadaa,” she wrote. “The three sailors injured . . . are admitted in Sultan Qaboos Hospital Salalah (Oman). Alauddin (Lucknow) is out of danger. Tajveer Singh (Ghaziabad) is stable while Atul Borker (Chennai) is critical. Our mission in Oman is providing all help.”
Indian media report that the incident was the result of a fire in the pump room, and that it occurred on either Friday or Sunday; accounts differ.
The DNV-classed, Panama-flagged Al Saada, built in 1994, is owned and operated by Etihad Engineering and Marine Services of Sharjah, UAE. Etihad operates seven or eight tankers of 2,000 to 8,000 dwt; the Al Saada is the firm’s smallest vessel. Her last reported position was off of Nishtun, Yemen, in February; no coastal AIS signal has been received since.
Minister Swaraj did not discuss the cause of the fire. Etihad told Indian media that it had “informed the Indian ambassadors in Sana'a and Muscat,” and was “holding talks with the Indian officials on sending the bodies home." The Times of India quoted Indian aid organization Sailors Helpline alleging that Etihad had inappropriately delayed family notification of the fatalities.