<![endif]--> Port of Rotterdam to Aid the Environment

Port of Rotterdam to Aid the Environment

THE Port of Rotterdam Authority has signed an international agreement to facilitate the exchange of residual and raw materials in order to boost commodities trade. 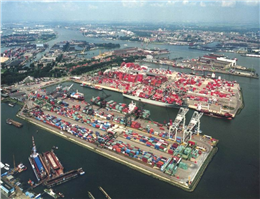 It noted that regional classification differences did not permit companies from the Netherlands and neighbouring countries to export residual particles of aluminium, lead, zinc, silver and gold extracted from ash in incinerators.
Thus these residual or secondary materials are often discarded as waste which impedes the formation of a circular economy that emphasises environmentally sustainable business practices.
Hence the signing of the agreement by Dutch, British, French and Flemish authorities to launch the North Sea Resources Roundabout initiative intends to help overcome these trade barriers.
"With this agreement, Dutch companies active in the raw material and waste processing industries will be able to benefit from the growing market,” said Dutch Minister of Economic Affairs Henk Kamp.
“This Green Deal shows that the circular economy creates both economic activity and jobs, as well as a better environment. For example, compost will be easier to trade because our neighbours will recognise it as fertilizer instead of waste".
Rotterdam port authorities in April 2014 had partnered with Rabobank Rotterdam, Bikker & Company and Van Gansewinkel to establish the Circularity Center to explore knowledge development and business development in the areas of reusing raw materials and material components in a circular economy
0
Visit Home
Send to friends
Print
Newsletter
Share this news