A NEW grains terminal at the port of Yuzhni in Ukraine, which has begun construction and will be completed by 2018, may be a supporting factor for the panamax bulker segment going forward. 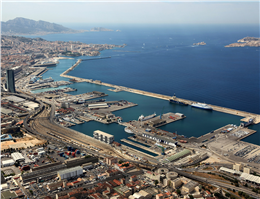 Cargill, one of the largest grains traders in the world, and MV Cargo, have agreed to respectively operate and construct the terminal, which will be able to handle 5m tonnes of grain per year.
Cargill said it has plans to export more than 70% from its Ukraine grains programme via the terminal, which will also be made available for third-party use.
“Around eight to 10 vessels doing round voyages could be permanently employed to serve the terminal, depending on cargo destination and congestion levels,” said Affinity’s dry cargo analyst George Nordahl.
“Any shipments destined for West Africa or Saudi Arabia would increase that number due to the extended voyage length and often slower terminal operations,” he added.
The figure is based on 65 cargo loads to carry the 5m tonnes and an assumption that each vessel would be doing roughly eight trips per year.
Although the number of vessels required is merely a fraction of the panamax fleet, it will help the beleaguered dry bulk market, which has seen record lows for much of this year due to an oversupply of ships and faltering demand for raw materials from places like China.
MV Cargo will fund the $100m terminal construction with private funds and a loan, which is being discussed, from the European Bank for Reconstruction and Development and the International Finance Corporation.
The joint venture has the land rights and has secured a permit to build the berth, which will have a depth no less than 16 m to allow larger vessels of up to 100,000 dwt, Cargill said, adding that other permits are still in progress.
Cargill may be positioning itself to take advantage of a rise in demand for grains such as wheat as the world’s population expands. Exports from Ukraine mainly go to Saudi Arabia, West Africa and Egypt.
According to the International Grains Council, consumption of grains, which includes soybeans and wheat, will grow by 5% to 2.1bn tonnes in the next five years.
This translates into a rise in seaborne trade to 485m to 490m tonnes by the end of the decade, versus 450m tonnes in 2015, according to estimates by Simpson Spence Young.
Black Sea exporters will account for 29% of global wheat trade in 2020, up from an average of 24% in the 2015-2016 period, the IGC said in a report in December.
Maize shipments by Ukraine are forecast to increase to 20.4m tonnes by 2020, it said. That is 4.4m tonnes more than in 2015.
0
Visit Home
Send to friends
Print
Newsletter
Share this news